An event every year that begins at 12:00 am on day 4 of February, repeating indefinitely 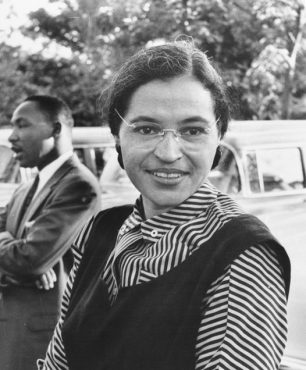 Rosa Louise McCauley Parks (February 4, 1913 – October 24, 2005) was an American activist in the civil rights movement best known for her pivotal role in the Montgomery Bus Boycott. The United States Congress has called her “the first lady of civil rights” and “the mother of the freedom movement”.

On December 1, 1955, in Montgomery, Alabama, Parks rejected bus driver James F. Blake’s order to relinquish her seat in the “colored section” to a white passenger, after the whites-only section was filled. Parks was not the first person to resist bus segregation, but the National Association for the Advancement of Colored People (NAACP) believed that she was the best candidate for seeing through a court challenge after her arrest for civil disobedience in violating Alabama segregation laws. Parks’ prominence in the community and her willingness to become a controversial figure inspired the black community to boycott the Montgomery buses for over a year, the first major direct action campaign of the post-war civil rights movement. Her case became bogged down in the state courts, but the federal Montgomery bus lawsuit Browder v. Gayle succeeded in November 1956.