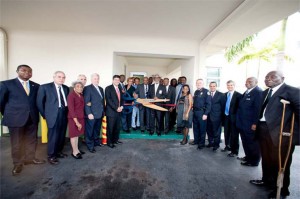 “We are excited to have a facility in the Overtown area that reminds us of the past and prepare us for the future,” said Commissioner Michelle Spence-Jones. “This museum was a dream that was built as a labor of love for the retired police officers.”

The museum is located in the only known structure in the nation that was designed, devoted to and operated as a separate station house and municipal court for Blacks. The precinct serves as an important icon in Miami’s Black history as a reminder of the pioneers who led the way for African Americans to serves in various roles of police enforcement through the years.

The grand opening was the pre-cursor to a special exhibit for Black History Month. The exhibit will detail the history of the building and of Miami as society transformed into acceptance and racial tolerance. During the month of February individuals and groups will be able to tour the facility and the exhibit. The Black Police Precinct and Court House Museum will be open from Tuesday through Friday from 10:00 a.m. – 5:00 p.m. For more information residents can call (305) 416-1300.