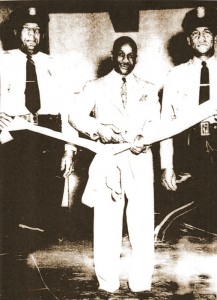 In September of 1944, the Miami Police Department began hiring black police officers. In May of 1950, a police precinct was established at 480 NW 11 Street to provide a station house for African American policemen and a courtroom for African American judges in which to adjudicate African American defendants. This building is unique as there is no other known structure in the nation that was designed, devoted to and operated as a separate station house and municipal court for Blacks. The precinct closed in 1963 and the police department was integrated at the main MPD police station.

The Black Police Precinct was built in 1950 to provide a separate and segregated headquarters for Black officers.  Separation of the Black and White races was the Jim Crow law of the South. Six years before the precinct was built the first five African American patrolmen were hired in 1944 . The patrolmen were Ralph White, John Milledge, Clyde Lee, Ed Kimble and Moody Hall.

The building was designed by renowned Miami architect, Walter G. DeGarmo.  The Black Precinct and Courthouse was the first and only one of its kind built in the nation. Miami was recognized as a pioneer in trying to bring some level of equality to policing in the black community.  During those six years they had no headquarters, no cars, and no radio contact.  They policed by walking, riding bicycles, and using the office of a Black dentist as headquarters, and later a one bedroom apartment in the “Central Negro District.”  There are many stories of arrested prisoners being taken to jail on bicycle handlebars, or by walking and sometimes by hailing a Black citizen’s car as it was driving by.

These first five were the beginning of a new era of law enforcement for the 43,000 black Miamians, most living in “the Central Negro District.” By the time they moved into their new building in 1950, there were 41 black officers on the force.  Opening day was a big occasion for the Black community.

The police department remained segregated for nearly 20 years after the first five were hired.  Racial discrimination and segregation dominated the police well into the 1960’s and severely handicapped the Black police officers progress and advancement.